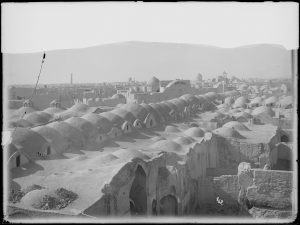 Shahs and their courts, royal art and architectural patronage, capital cities, and dynastic histories still dominate narratives of Iran’s past. Although these narratives provide us with invaluable insight into the history of Iran, they only address a small portion of people, artifacts, buildings, and cities of its past. In other words, royal figures and architecture consisted of a minority of the population and built environment of the capital cities of Tehran, Isfahan, or Shiraz, while they were virtually absent from the lives of many other cities across the Iranian Plateau. So, who built those cities? And how?
This talk focuses on the reconstruction of the city of Kashan, a provincial urban center in central Iran, after a devastating earthquake in the late eighteenth century. By examining the regional and local political histories of Kashan concerning its notable households and their architectural patronage, this study discusses the role the local elites played in the revival of the city’s economy and built environment with no significant dynastic interference from outside.

Nader Sayadi is a post doctoral fellow at the Metropolitan Museum of Art, New York.  He is a specialist in Islamic art, architectural, and urban history with a concentration on early modern global economic history. His academic and professional background is in historic preservation and architectural design. His research interests include textile history, the built environment of manufacturing, commerce, trade, and mobility, the material culture and built environment of power and piety. His talk will cover the architectural and urban history of the city of Kashan, in the eighteenth through the nineteenth century from the viewpoint of the local economy and the craft of silk weaving.

This talk will be held on zoom.