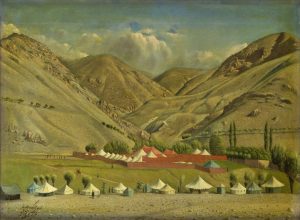 The corpus of landscapes was painted by the leading court painter of the Naser ed-Din Shah era, Mohammad Ghaffari, Kamāl-al-Molk who was also the principal exponent of European style Academic painting (and Naturalism) in the late Qajar and early Pahlavi eras. Kamal al-Molk is perhaps best known for his portraiture and architectural views but my research has led me to conclude that he had an abiding interest in the genre of the landscape.

The works fall into two chronological groups. The first group features four views of Iranian mountain landscapes dated to the 1880s, which are among his earliest known works. The second group is comprised of two European landscapes, which may be assigned to sometime between 1898 and 1901, executed either in Florence or Paris where Kamāl-al-Molk lived during those years. As a group, these paintings are remarkably fresh and largely unrecorded.  The landscapes and their lengthy inscriptions by Kamāl-al-Molk himself giving details of date and location, provide the framework for our discussion: first I will discuss Naseri court culture and Kamāl-al-Molk’s career. second I will present an analysis of the works of the 1880s Kamal al Molk landscapes and the post-1900 landscapes of Kamal al Molk and his School ;and finally consider their significance for the Iranian landscape tradition and the birth of Iranian Modernism.

Dr Layla Soudavar Diba was the founding director of the Negarestan Museum in Tehran, which specialised in 18th and 19th century painting. She now lives in New York. She has served as the associate curator and of Asian Art and as a curator of Islamic Art at the Brooklyn Museum.  She has been an art adviser to various organizations such as the Metropolitan Museum of Arts. She is a member of the board of trustees of the Encyclopaedia Iranica and of the Soudavar Memorial Foundation. She has also written a number of books and articles on the arts and crafts of Iran.