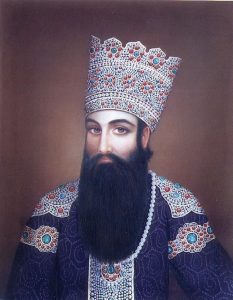 Prince Abbas Mirza, son of Fath Ali Shah, was Crown Prince and, as was the tradition, was Governor of Tabriz. He  modernised the army and many institutions and was the first interface with visiting European envoys, who had to pass through Tabriz on their way to Tehran. He died young and many regretted that he never became Shah. A fertile and active man, he begat some 26 known sons.

Dr Ala is a member of our council and has led a very distinguished medical career in Iran and England. He currently lives in Washington DC. He is an amateur historian and counts Abbas Mirza as one of his ancestors. His father Hussein Ala, then Iranian Minister to London, was chairman of the Iran Society in 1935, when it was revived from the ashes of the lapsed Persia Society founded in 1911 by his predecessor Mirza Mehdi Khan Moshir ol-Molk.