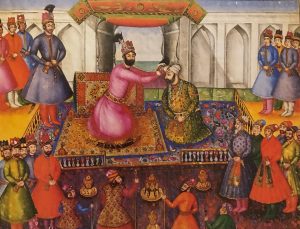 Nader Shah ruled Iran from 1736-1747. A military genius, he campaigned almost non-stop in  the Caucasus, Ottoman Turkey, Central Asia, Afghanistan and the Persian Gulf, through to Mughal India, where he famously captured the Peacock Throne. His career ended with assassination at the hands of his own men.

This talk will give a general overview of how Iran was transformed from an embattled, invaded, and partitioned realm into what was perhaps the foremost military power in Eurasia—one which brought many neighbouring kingdoms, and even empires, into its orbit. It will explore the meteoric rise of Nāder, the man at the heart of this new ‘Empire’ (Shāhanshāhi), and the transformations which brought about his colossal Empire and, in turn, the transformations which the Empire brought to Iran and the Persianate world more broadly.

Mohammad Amir Hakimi Parsa is a PhD student at SOAS. He took a BSc in Mathematics at Royal Holloway before moving to SOAS to study history, In between, he worked as an analyst in the Dept of Energy & Climate Change and at MECS, and wrote articles for Encyclopaedia Islamica.

His extraordinary knowledge of Nader Shah stems from his study of original documents at the Al-Biruni Library in Tashkent.  For all that, he has the gift of lecturing in an easily accessible style that appeals to the non-specialist.

The lecture is free and open to non-members, who will be invited to join the society via the website.

After registration you will receive an email with joining instructions